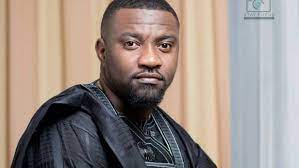 John Dumelo (born February 3, 1984) is a Ghanaian actor, farmer and politician. On April 1st 2014, he emerged as the first Ghanaian to hit a million likes on Facebook.

Dumelo was born in Ghana. He had his basic education at Christ the King School in Accra. He attended Achimota School and further studied Civil Engineering at Kwame Nkrumah University of Science and Technology. and later enrolled in GIMPA’s School of Public Service and Governance. He started acting in the early 1990s in a 1991 movie called Baby Thief.

John Dumelo is married to Gifty Mawunya Nkornu. He held a grand wedding at Royal Senchi Resort in Akosombo. The couple’s first child was born on 16 October 2018. He is named John Dumelo Jnr. after his father.

Aside being an actor of international recognition, John Dumelo is an entrepreneur.He launched his clothing line (J.Melo) in 2012. The Actor is also known to be involved in both Crop and Animal farming.

During the National Democratic Congress (Ghana) NDC Party’s Campaign In 2016, Dumelo was one of the most influential and outstanding celebrities who were seen campaigning for the NDC Government. Rumours have spread that, as an appreciation for his engagement and patriotism to the Party, he was called and appointed by the former president of Ghana H.E John Dramani Mahama

Former President of the Republic of Ghana, to serve his Party as a Director of Operations for pro-NDC youth group for the National Democratic Congress (NDC).