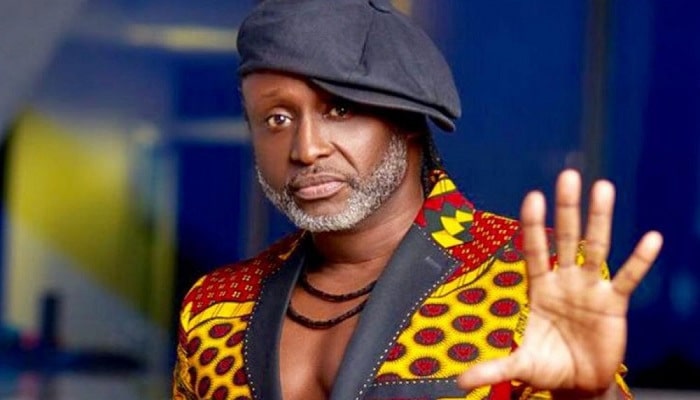 Reggie Rockstone (Reginald Yaw Asante Ossei, “the Godfather of Hiplife”) is a Ghanaian rapper . He was born in the United Kingdom but lived his early years in Ghana in Kumasi and Accra. He has been living in Ghana continuously since he pioneered the Hip-Life movement in 1994.

He pioneered the Hiplife art form and has played an important role in the development of this uniquely African genre in Ghana’s capital Accra. He raps in Akan Twi and English. In 2004, Rockstone won the Kora Award for the best African video and he performed in front of a 50,000-person crowd in Ghana, together with Shaggy. In 2006 he recorded a track with the Jamaican Dancehall singer Beenie Man called “Chukku Chakka” (in reference to Rockstone’s 1999 hit “Eye Mo De Anaa”, which sampled Fela Kuti).

Born in the U.K. on April 11, 1964, Reginald Osei aka Reggie Rockstone attached himself to the Hip Hop movement in the early 80’s as a dancer. Travelling on a tri-continental basis (i.e. Accra, New York, London), he broadened his Hip Hop scope. A natural performer and trained actor, he grabbed the mic with no problem when his calling came in 1991.

His first ‘fifteen minutes of fame’ came as a dancer in Accra, Ghana in the early 80’s. His second chance of fame came in 1992-93 as member of one of the top rap groups from London, England. He belonged to PLZ (Parables, Linguistics and Zlang) with Fredi Funkstone, Jay (both from West Africa) & DJ Pogo of the U.K. Number one hits from PLZ included “If it Aint PLZ” and an EP entitled “Build a Wall Around Your Dreams” released on an independent label called “Go For the Juggler.” 1994 became the watershed or turning point in his entertainment career. The rap scene in London was not rewarding enough. He returned to Accra to encounter a whole generation of people grooving to African-American rhythms, all heavily influenced by the same elements of Hip Hop that he knew all too well.

He had an idea! Use the hip hop beats with authentic phat production and lace it with true African dialect; The Akan language of Twi. It became the tool to make such butter classics as “Sweetie, Sweetie”, “Tsoo Boi”, “Nightlife in Accra” and “Agoo” from his debut album in 1997 entitled “Makaa! Maka!”. Launched on an independent label called KASSA RECORDS that he partly owns, Reggie Rockstone has reached Ghanaians and non-Ghanaians across four continents Reggie Rockstone is credited as the pioneer of hiplife or Kasahara music in Ghana and like some masters of the art of hip hop, he has proclaimed his retirement and out of retirement several times. His specialty in Asante Twi and is incredibly well versed in English too. He is internationally acclaimed, with several performances throughout West Africa, the UK, France, USA and Switzerland.

APPOINTMENTS TO BE ON JUDGES PANELS

In 2013 he was selected to be a judge of the maiden edition of the Glo X Factor Africa along with Onyeka Onwenu and M.I. He was also a judge for the fifth edition of the Malta Guinness Street Dance competition in 2012.

In 2009 Rockstone was one of 17 Public figures,who were outdoored by Globacom to endorse their brand, which was part of their preparations to roll out in Ghana.

He introduced Rockstone Condoms, which is his own brand of the contraceptive to the Ghanaian market in August 2013. With this move, he was pitching in to the zero infection or prevalence initiative against HIV/AIDS’s goals.

Rockstone recorded four albums for the Kassa Records label and one for MixerPot: