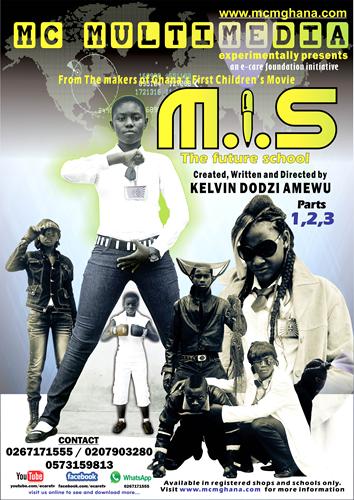 The benevolent producers of Ghana’s first children’s movie, once again, will soon release another hit movie for every child in Africa.  The title is simply M.I.S. As usual of their movies, Creator / Writer and Director of the movie, Kelvin Dodzi Amewu says M.I.S will never be complete until its subtitle: ‘The future school’ is appended to it.

M.I.S, according to its creator is a dimensional, new age and futuristic movie set in a noble School. Every scene in the movie will hold its viewers gripped to the screen until the end.

History in the school has it that, the OUTCAST CLASS, instead of transforming the lives of its students, rather worsens their plight. Will the school authorities therefore succeed or fail with this last attempt?

Elaborating on the story line, Kelvin Dodzi Amewu scribbled this as the synopsis of the story:

“Africa is about to collapse. The future is not good. Call it Doomsday or maybe the “Student Cocaine”. The Examination council is in deep trouble. Soon all of its structures will be broken beyond repairs. This is due to the fact that JESSICA, a smugglers daughter and a non performing student of M.I.S has discovered a new pen which she believes will end the misery of every student in Africa, the I-PEN she calls it.

With her new discovery, she consciously decides to destroy Africa, with Ghana as her starting point. Interestingly she is supported by her rich friends, both alike in Character, DON TUNDE and SULE with their mysterious partners: BONGO, SLEEP O’CLOCK and GURL. Will she be able to carry out this Diabolic Agenda? Especially at a time the school’s authority have decided to clamp down on students who desire to cheat in exams. Find out for yourself in M.I.S (The future School)”

‘M.I.S, for now, may be taken for granted due to the fact that it is fictional and experimental in nature. But the reality it presents might soon hit Africa, and when it does, we will provide the solution.’ He added.

Talking about his reason for doing such a movie, he said that he has seen the future and what is about to befall Africa. This is why he decided to produce this movie to forewarn all stake holders involved.

M.I.S is different in diverse ways, It is simple in PLOT and THEME, DIMENSIONAL in presentation, UNIQUE in treatment of a subject matter no one has thought about, EXTREMELY PROLIFIC in storytelling, DIRECTING, EDITING and PACKAGING and most of all, EASILY ACCESSIBLE. Just visit www.dkidzafrica.com  to subscribe and watch.

He also added that this is the first children’s movie from Ghana that has FRENCH SUBTITLES for those who do not understand English. This will also help children in French speaking countries to enjoy the movie without complaining about the language barrier. A VIDEO DIRECTOR’S COMMENTARY is also included for those who want to further understand some of the unique and wonderful concepts implanted in the movie.

This is a Dkidz Africa Initiative, makers of MEKEL’S ANGELS (This is our story) and KIKIBUTI (Little land of Hope) and proudly supported by MC MULTIMEDIA, a media production firm based in Accra.